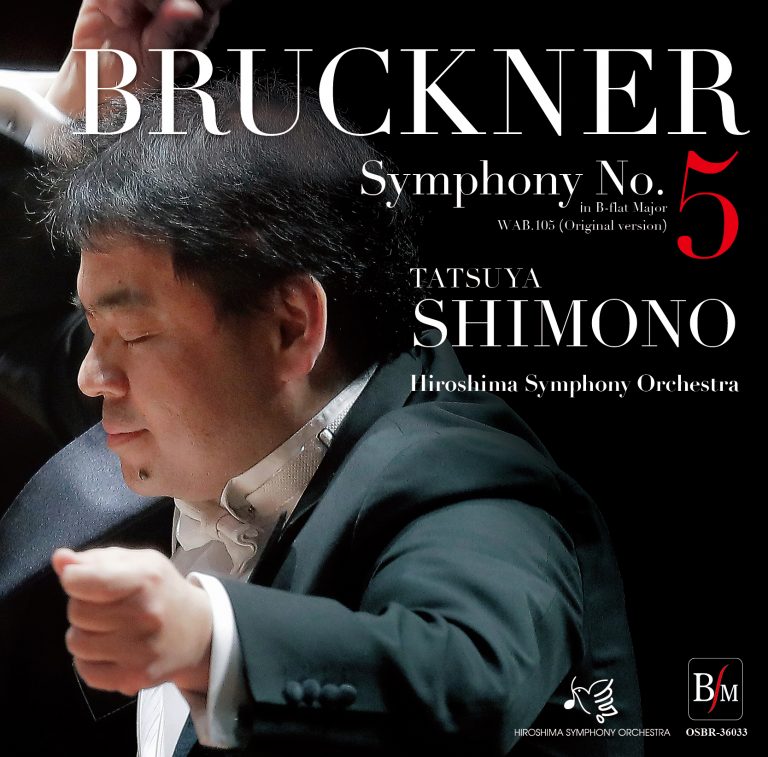 [From the booklet – Atsuya Funaki, a music critic]
On this CD, Bruckner is performed in a dignified manner. Even in a section of a piece where it would seem that a greater effect could be achieved if performed more rapidly, it is not so performed. More often, the orchestra takes much time performing the piece if needed. At several long grand pauses inserted by the composer, they stop performing properly and calmly. Although the sound of brass instruments is clear, it is not overly loud and penetrating. (…) I think that Shimono and the HSO perform Symphony No. 5 with the utmost attention and great passion to accurately construct its world. This results in a dignified performance of Bruckner’s Symphony.

[From the website of Tower Records]
This dignified performance of Bruckner’s Symphony has been realized through a tradition that has been passed down by HSO members since the Hiroshima Symphony Orchestra was founded in 1963. Meanwhile, I think that this is one of the greatest performances that the current HSO members have achieved. This performance has been made possible by the deep attachment of Tatsuya Shimono to the piece and by the thorough preparations made by both Shimono and HSO members. This CD, produced by their tremendous exertions, will create a stir in orchestral circles in Japan. We believe that this great CD will surely delight a wide range of music lovers throughout Japan as well as Bruckner fans.

Beethoven: Symphony No. 9 with Chorus 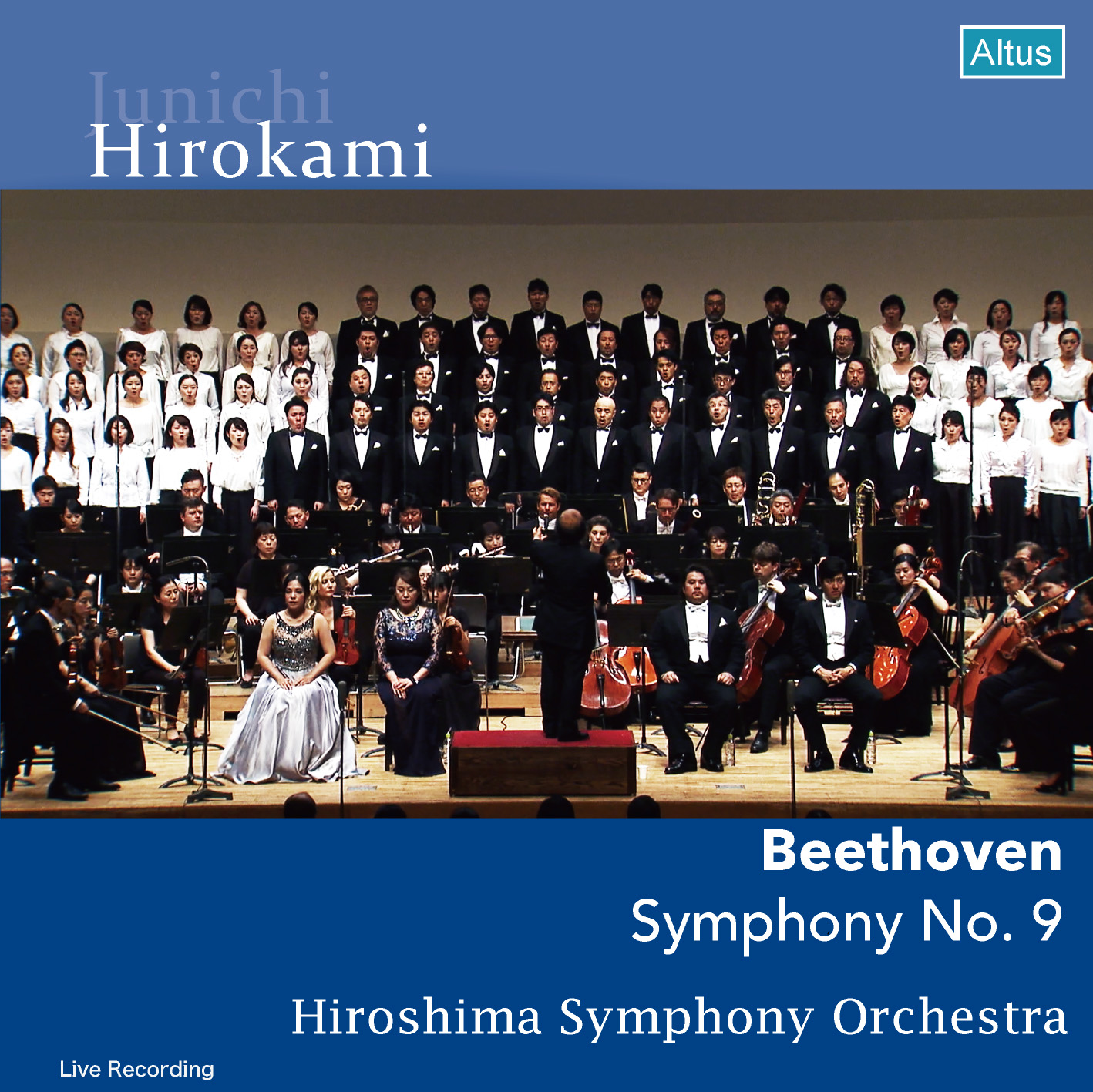 The performance of Symphony No. 9 at the Summer Concert held in July 2018 has become available on CD. This spirited and convincing performance is given by Hiroshima Symphony Orchestra members as well as outstanding guest musicians and highly-skilled solo singers and chorus! The prominent guest musicians include Radek Baborák, who always fascinates the audience with his performances, Clara Dent, who is the principal oboist in the Berlin Radio Symphony Orchestra, and László Kuti, who is the principal clarinetist in the Munich Philharmonic Orchestra. The direction of Junichi Hirokami is profound, decisive, and strong, in a clear departure from smart performances for early music. The thunderous way of striking the timpani of Svatopluk Cech, who is a timpanist in the Prague Symphony Orchestra, is so powerful that the enthusiasm of the venue is directly transmitted. An exciting performance lasting until the end of the third movement moves us significantly. Meanwhile, the vocals entering from the fourth movement makes the performance even more magnificent. The high level of musicianship of the solo singers and chorus further rouses the orchestra members, and their performance imparts the joy of living. A long fermata on the F major triad chord immediately before the march section has a very strong impact that is reminiscent of a performance conducted by Wilhelm Furtwängler!
* Part of the proceeds of the CDs will be donated as a contribution for the West Japan Heavy Rain Disaster. 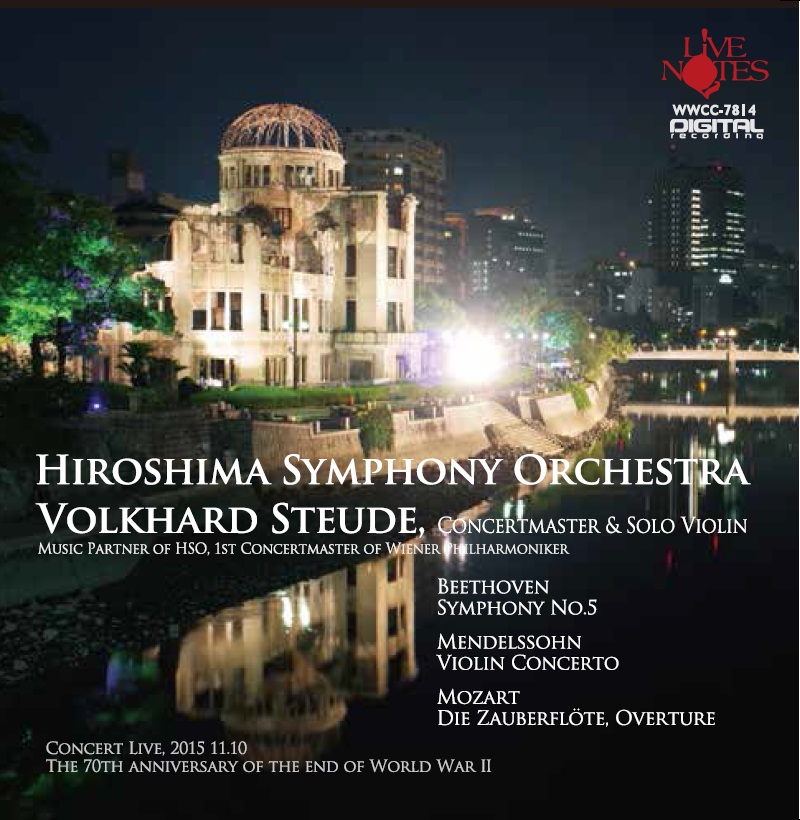 If you listen to this ensemble full of elaborateness, powerfulness, delight, and spontaneity, your normal negative image of a conductorless performance must change fundamentally. (…) What Volkhard Steude wants Hiroshima Symphony Orchestra (HSO) members to do is probably not to see the music, but to listen and feel the music. I believe that HSO members have succeeded in giving such an exciting and excellent performance because they were able to precisely understand his message.
– Music journalist: Yuichi Iwano

“Music Gift Vol. 1 – A Prayer for Hope for Coming Babies”

In commemoration of the 70th anniversary of the A-bombing in Hiroshima, this original CD was recorded in a studio in December 2014 with a “prayer” as the theme. Consisting of famous masterpieces, it has been created to provide peace of mind to pregnant women and other people. The Gift Shop “Daishin” has supported the Hiroshima Symphony Orchestra and the culture of Hiroshima, and has created this collaboration CD to promote the regional culture and to send cheers to pregnant women. The “jyaken” Mozart” CD called an illusory CD, which was released in 2006 and sold out immediately, was re-pressed in response to demand for an encore! A violin version of Carp Boya sticker, which won a favorable reception last time, is enclosed on the CD as an incentive. This is a memorial CD for all people who love Hiroshima. For purchase, please contact Futaba Tosho Co., Ltd. or the Hiroshima Symphony Orchestra Secretariat. 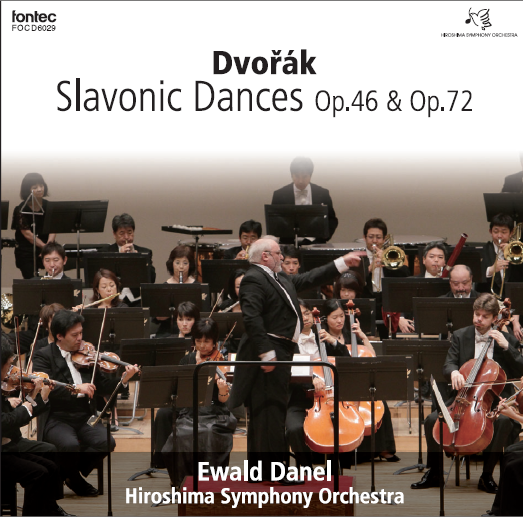 Following the CD “From the New World” released in 2011, this newly released CD features the wonderful music of Dvořák beautifully conducted by Ewald Danel. The CD was recorded at the Cultural Hall of Kure City, which has the best acoustics in Hiroshima Prefecture. With the recorded sound quality more excellent than ever, this CD enables you to fully experience the essence of a performance given by the Hiroshima Symphony Orchestra.

Dvořák: Symphony No. 9 “From the New World” / Conductor: Ewald Danel 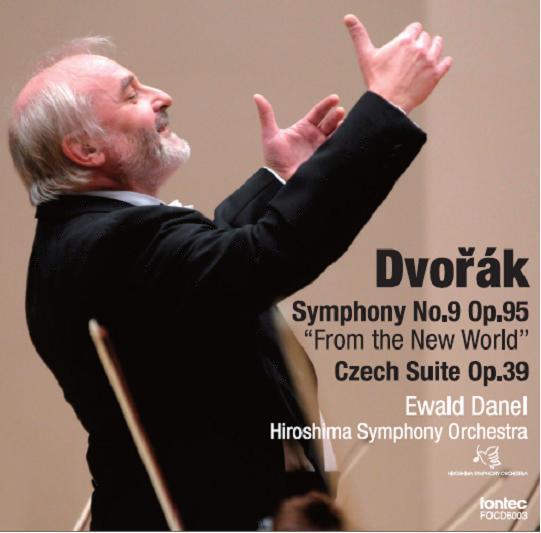 After listening to the CD, I am tempted to call out, “This performance has made me feel that Dvořák has become my most important friend.” On this CD, Ewald Danel conducts the music of Dvořák in a modest, profound, and heart-touching manner.
– Music critic: Sachio Moroishi 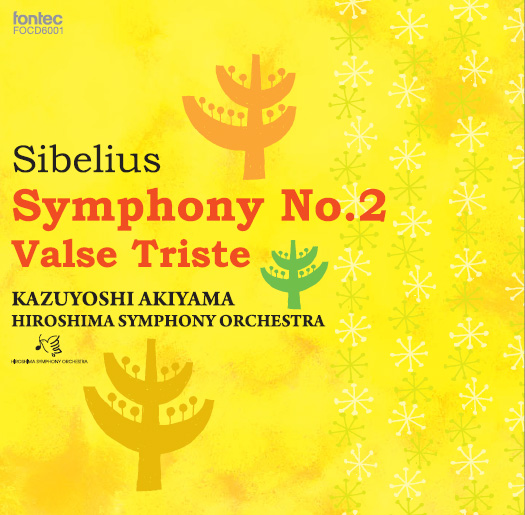 Since 1984, Akeo Watanabe had served as the second Music Director of the Hiroshima Symphony Orchestra (HSO). For HSO, which received tutelage from him, Northern European music, especially the music of Sibelius, is one of the most important repertoires.
Symphony No. 2 has often been performed by HSO under the direction of Music Director Kazuyoshi Akiyama. On this CD, Symphony No. 2, a great masterpiece written by Sibelius with enthusiasm for the independence of Finland, is dramatically and emotionally performed by HSO members under the direction of a great music director, Akiyama, with all their might. 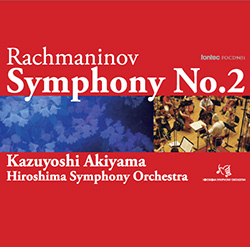 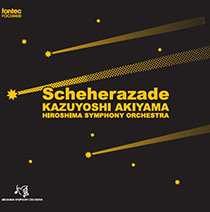 The Hiroshima Symphony Orchestra (HSO) has disseminated music to the world from Hiroshima, an International City of Peace and Culture, placing its wishes and prayers for peace in the form of music. Recorded in a studio for the first time by HSO, this CD consists of a collection of famous Russian works written on theme of love.
It includes three popular works: Scheherazade, which impressed the audience at the 281st Subscription Concert held on July 22, 2008, a beautiful Adagio from Spartacus, and Vocalise used as an encore in the HSO’s performance held in Russia in 2003. There is no doubt that you will be deeply impressed by the brilliant and splendid musical performance given by HSO members with all their might under the expert baton of Music Director Kazuyoshi Akiyama. 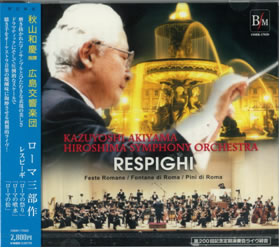