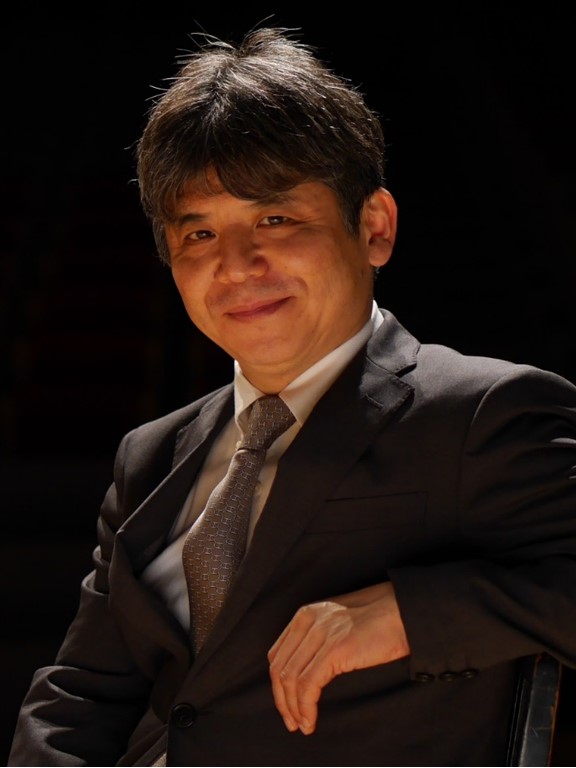 Toshio Hosokawa was born on 23 October, 1955 in Hiroshima. He has been to Germany to study composition for ten years since 1976, with Isang Yun at the Hochschule der Künste in Berlin and with Klaus Huber at the Staatliche Hochschule für Musik in Freiburg.

In 1980, Hosokawa participated for the first time in the Internationale Ferienkurse für Neue Musik in Darmstadt. Since then, he has been working on composition mainly in Europe and Japan, gaining a good reputation worldwide as one of the leading Japanese composers and being commissioned by the primary orchestras, the major music festivals and the significant opera theatres in Europe and America one after another.

His second opera Hanjo commissioned by the Festival d’Aix-en-Provence in 2004 (Anne Teresa de Keersmaeker, staging), his orchestral work Circulating Ocean, commissioned by the Salzburg Festival in 2005 (premièred by the Wiener Philharmoniker), Woven Dreams, an award-winning work of the 5th Roche commissions in 2008 (for the Lucerne Festival and the Carnegie Hall, premièred by Cleveland Orchestra at the Lucerne Festival in 2010, won the British Composer Awards 2013), his third opera Matsukaze commissioned by La Monnaie in 2011 (Sasha Waltz, staging), The Raven commissioned by United Instruments of Lucilin, Horn Concerto –Moment of Blossoming–, co-commissioned by Berliner Philharmoniker, the Barbican Centre London and Concertgebouw Amsterdam (premièred by the Berliner Philharmoniker in 2011) and many others were premièred under the baton of the world’s leading conductor, for example, Kazushi Ono, Jun Märkl, Kent Nagano, Sir Simon Rattle, Robin Ticciati, Franz Welser-Möst, and so on. Many of these mentioned works have been performed as an important repertoire in each genre.

At the Salzburg Festival 2013, many works by Hosokawa were performed, including two premières: Klage for soprano and orchestra (his second commissioned work by the festival), and Ancient Voices –In memory of Wolfgang Schulz– for wind quintet (commissioned by Ensemble Wien- Berlin). Concerto for trumpet and orchestra “Im Nebel” (premièred in The Suntory Foundation for Arts Summer Festival 2013) won the Otaka Prize for the third time in 2014. In his recent works, Hosokawa is especially engaged in depicting the relationships between nature and human being, composing works that are meant to be a prayer and a requiem; in 2014, his concertos Aeolus and Fluss, vocal work Drei Angel-lieder, and etc. were premièred in Europe one after another, in 2015, Nach dem Sturm for two sopranos and orchestra (commissioned for Tokyo Metropolitan Symphony Orchestra’s 50th anniversary by itself) was premièred by Kazushi Ono and the orchestra in November in Tokyo and received the national premières at its concert tour around Europe.

In January 2016, his opera Stilles Meer (Oriza Hirata, the original text and staging) that describes Fukushima several years after The Great East Japan Earthquake was premièred in Hamburg. In December 2017, Futari Shizuka (Oriza Hirata, the original text) commissioned by Ensemble Intercontemporain was premièred with the baton of Matthias Pintscher at Cité de la Musique, Paris (concert version). In July 2018, the latest opera Erdbeben. Träume (libretto: Marcel Beyer; the original text: Heinrich von Kleist “Das Erdbeben in Chili”) was premièred in Oper Stuttgart, directed by Jossi Wieler and Sergio Morabito, and conducted by Sylvain Cambreling. It greatly attracted attention of many people, and was highly praised by the audience.

In 2001, Hosokawa became a member of Akademie der Künste, Berlin. He was Composer-in-Residence with Tokyo Symphony Orchestra in the 1998-2007 season, with Deutsches Symphonie Orchester Berlin in the 2006/2007 season, with WDR Rundfunkchor Köln in the seasons 2006-2008, and with Nederlands Philharmonisch Orkest in the 2013/2014 season. In 2006/2007 and again in 2008/2009 he was invited as one of the Fellows by Wissenschaftskolleg zu Berlin. In 2015, he was Composer-in-Residence with Mozartfest Würzburg. In 2012, he was elected to a member of Bayerische Akademie der Schönen Künste, München, and received the Medal of Honour with Purple Ribbon from the Goverment of Japan in Autumn. In 2018, he received The Japan Foundation Awards.

Currently, he serves as Music Director for the Takefu International Music Festival, a guest professor at Tokyo College of Music and at Elisabeth University of Music.