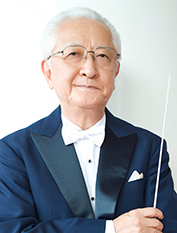 Born in 1941, Kazuyoshi Akiyama studied conducting under Hideo Saito at the Toho Gakuen School of Music.

In 1991, Kazuyoshi Akiyama led the Tokyo Symphony Orchestra on a successful world tour to celebrate the orchestra’s 45th anniversary. Three years later, he conducted a concert style performance of Schoenberg’s opera Moses and Aaron for the TSO’s 400th subscription concert. The performance received great critical acclaim and became the hottest topic of the year in the Japanese musical world. The CD with the recording from this performance was hailed enthusiastically by prestigious musical magazines both at home and abroad.

Kazuyoshi Akiyama led the Tokyo Symphony Orchestra again to international venues on a European tour to celebrate its 50th anniversary in 1996 and a tour to Turkey and Italy in celebration of its 55th anniversary in 2001, earning high recognition everywhere they performed.

Having been an ardent advocate of new repertoires, Kazuyoshi Akiyama presented Schoenberg’s Jacob’s Ladder and Janacek’s opera The Cunning Little Vixen (in stage style performance) in 1997 and conducted Japanese premieres of operatic works such as Lachenmann’s Das Madchen mit den Schwefelholzern (The Little Match Girl) (in concert style), Janacek’s Kata Kabanova (performed by the original language) in 2000, and John Adams’ El Niño in 2003.

Kazuyoshi Akiyama is the recipient of numerous highly prestigious honors in Japan including the Suntory Music Award (1975), the Arts Encouragement Prize of the Minister of Education (1995), the Osaka Citizens Theater Award (1989), the Osaka Arts Prize (1991), Kawasaki City Cultural Prize (2007), and Hiroshima Citizens Award (2008). Together with the Tokyo Symphony Orchestra, he received the Mainichi Arts Award (1994), the Kyoto Music Award (1993), the Mobile Music Award (1996), and the Suntory Music Award (1997). In recognition of his outstanding cultural contributions, the Japanese government bestowed to him the Medal with Purple Ribbon in November 2001 and the Order of Rising Sun with Gold Rays with Rosette in June 2011, and made him the Person of Cultural Merit in 2014. Also in 2014, he received the Chugoku Cultural Award from Chugoku Shimbun Newspaper and the Special Award for Distinguished Service from Tokushima prefectural government. In 2015, he was honored with the 2015 Akeo Watanabe Music Foundation Special Award.

In 2014, Akiyama celebrated the 50th anniversary of his conducting career, which he recounts in detail in his memoir (co-authored/Artes Publishing) published in February 2015.

Kazuyoshi Akiyama currently holds the title of Artistic Director and Principal Conductor of the Chubu Philharmonic Orchestra, Conductor Laureate of the Tokyo and Kyushu Symphony Orchestras, Honorary Conductor for Life of the Hiroshima Symphony Orchestra, Artistic Director and Special Professor of Senzoku Gakuen College of Music, and Visiting Professor of Kyoto City University of Arts. He is named as Music Advisor to the Japan Century Orchestra starting in April 2020.